Pine (Pinus sylvestris) is the most common tree species in Finland. It needs lots of light, but tolerates cold, drought and nutrient scarcity well. 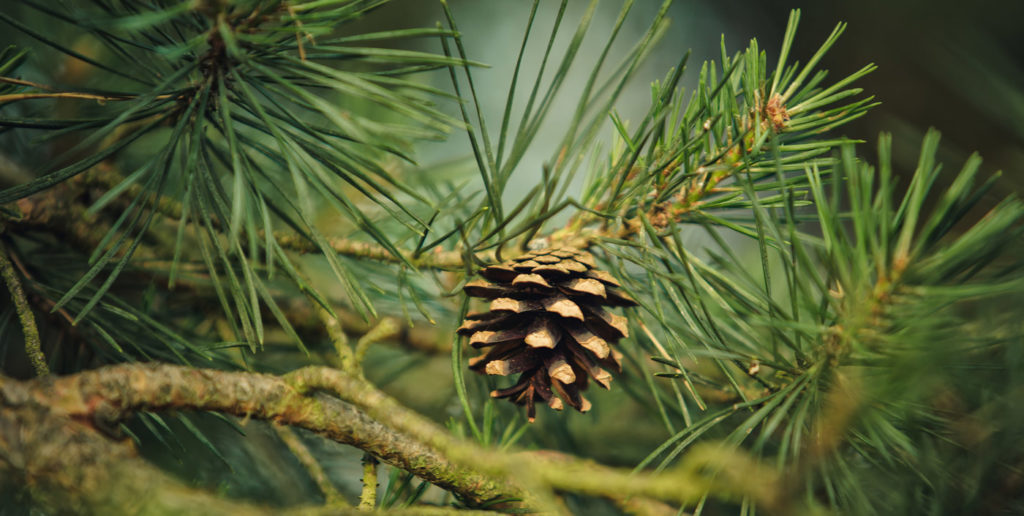 A new type of biofuel, pine oil, can be used for the purpose of powering diesel engines. Pine oil is extracted from pine (Pinus sylvestris) during the pulping process. Modern pine oil plants are bio-refineries with a large range of different products. These refineries produce for example wood-based renewable biofuels, such as biodiesel for transport. The combustion performance of biofuel is comparable to diesel, whereas emissions are considerably lower making biodiesel a high quality biofuel suitable for any diesel engine.

In addition to biodiesel, pine oil can be used in car tires, chewing gum, lipstick and as anti-flammatory in animal feed. By selling pulpwood to forest industries, forest owners can thus support new bio-forestry innovations.

Spruce (Picea abies) grows in shady areas throughout Finland, except for the northernmost Lapland. It is the second most common tree species in Finland.

The fresh shoots of spruce are a natural source of vitamins

The fresh shoots of spruce are a healthy and tasty addition to your diet. The shoots can be added to salads or prepared into jams, drinks and syrups. Spruce needles can for example be infused into a nutritious tea since they contain a lot of vitamin C and beta-carotenes. To preserve the precious vitamins, the needles should be frozen or consumed immediately after collection. 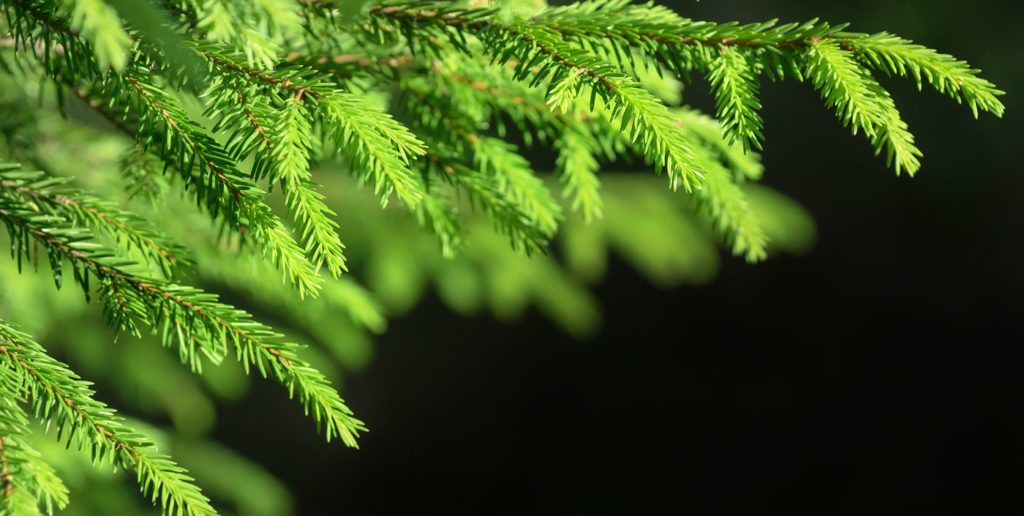 Did you know that your clothes can be made out of wood-derived fibre? Spruce wood contains long fibres, which bind together to make strong paper and other chemical products such as viscose. The origin of viscose is a natural fibre, which is chemically processed in wood pulping factories. Viscose is a breathable fabric that feels comfortable on skin.

Chaga mushroom (Inonotus obliquus) is a fungal parasite most commonly found on birch trees. It is traditionally known for its medicinal properties, but due to the recent enthusiasm for superfood, it has become increasingly popular as a nutritional supplement. 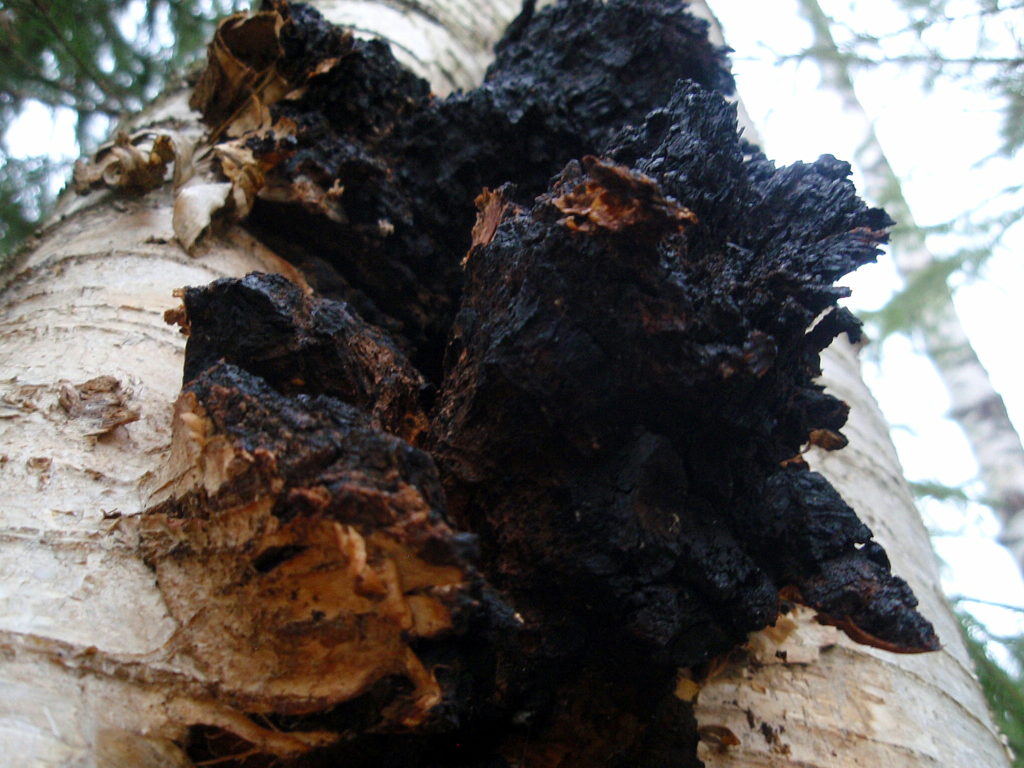 The crusty black conk emerges several years from inside the tree, pushing out and breaking through the bark. It is dense and deeply cracked on the surface resembling burnt charcoal. However, the interior is brownish with a corky texture.

Chaga is known to have many health benefits. It contains a wide array of different minerals and antioxidants with anti-flammatory and pain relieving effects. It has traditionally been associated with treating gastritis, skin diseases and even cancer.

Today the market for Chaga is exploding. Nutritional supplement companies capitalize on Chaga’s reputation as a medicinal mushroom charging up to EUR 800 per kg! Therefore, it is a valuable natural resource for forest owners. Everyman’s rights do not cover collecting the conks and therefore harvesting is only allowed in one’s own forest or with permission from the land owner.

Chaga can be prepared into a nutritious tea. It should be chopped into small pieces or grated and either dried or frozen for preservation. Steeping 2-3 small pieces or 1 teaspoon of powered Chaga in one litre of water for at least 20 minutes makes for a pleasant tea. The tea can be flavoured with honey, lemon or ginger according to taste.

Note that if you have health issues or take medication, you should consult your doctor before consumption.

Birch wood is denser than the wood of other Finnish tree species, which means that its energy content is also higher. A family can save hundreds of euros per year in electricity by replacing some of the heat demand of a detached house with firewood.  In power outages, wood can offer a valuable source of heat as fireplaces and stoves do not rely on electricity. Additionally, compared to fossil fuels, the carbon dioxide emissions incorporated with wood fuel are considerably smaller. 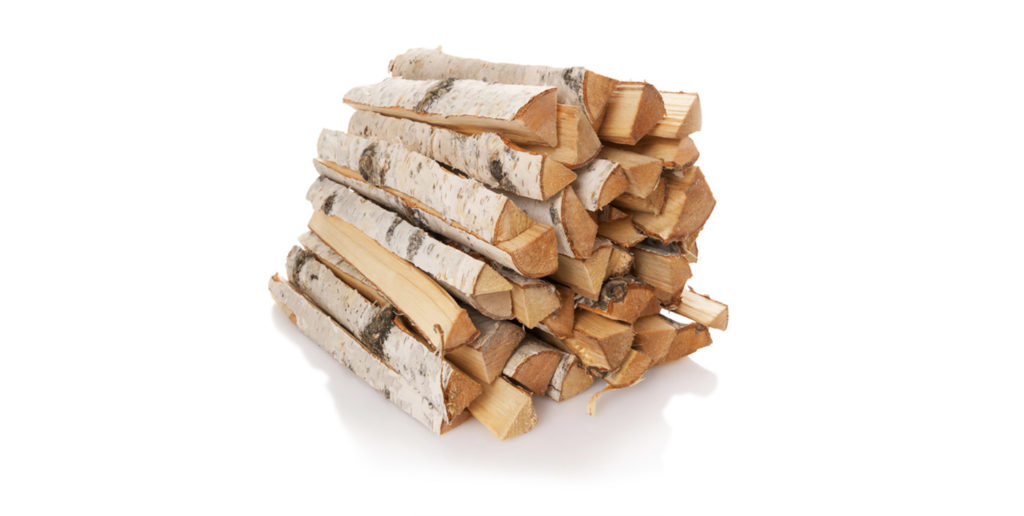 The market price for dry chopped birch firewood in southern Finland is 70-80 euros per thrown cord (one cubic meter of firewood that has not been stacked) including delivery. Therefore, outdoorsy forest owners can make a nice extra income by chopping and selling firewood.

In addition to the commonly used tree species, there is also a steady demand for the more unusual species. These tree species have special properties that make them desirable for a number of purposes.

Alder brings light and freshness into the sauna

Not only is alder wood valued in carpentry and the furniture industry, but it is also the most popular surface material in Finnish saunas due to its low thermal conductivity. The wood features a distinctive scent and a beautiful pale red color, and it stays nice and cool even in the warmest of saunas.

The demand and supply of alder vary due to the small size of the market. However, forest owners usually get EUR 40-45 per cubic meter of alder timber. The final felling age of alder is 50-70 years bringing faster income compared to the rotation period of 70-90 years for the Finnish pine or spruce. Global warming improves the growing potential of alder and widens its geographical distribution in Finland.